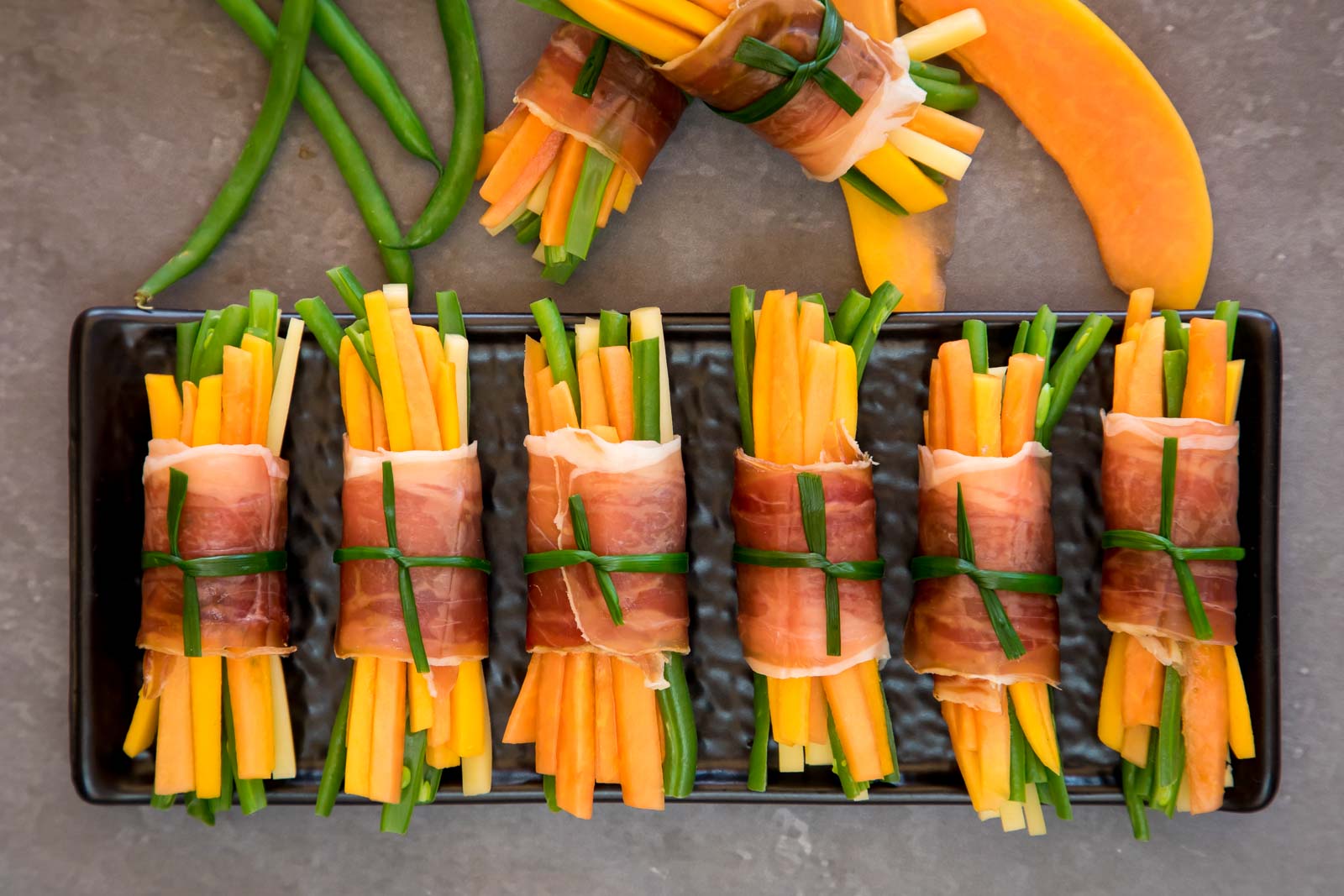 The combination of cold meats and papaya is a match made in foodie heaven, because the meat’s savouriness and the fresh, sweet papaya show each other to best advantage. These little papaya bundles could probably be made with an infinite number of other ingredient combinations, so feel free to play around and use what you have in the pantry. Cocktail food is often a difficult item for venues to provide, with many places relying on starch-driven items such as cocktail sausage rolls or deep-fried items. They can however be super healthy and deliciously light. These are just such an example. They are simple to make, and one could probably make them well in advance and just keep them in a covered container in the fridge, to whisk them out right before your guests arrive for a smart party or as part of a traditional cocktail event.

Cocktail or finger foods, also referred to as canapés, are mostly built on a bread or baked pastry base. French canapés have apparently been around since the late 1700s and like Italian crostini, began as a toasted or fried piece of bread with various toppings. The word ‘canapé’ literally means sofa, and one can quite easily envision why if you consider the way a topping ‘sits’ on a small sliver of bread. Today, the word ‘canapés’ refers to a variety of small bite-sized food items to be eaten by hand at parties. The evolution of healthy eating habits means that they no longer have to be some topping on a starch base. Canapés and cocktail parties became fashionable during the American Prohibition of the 1920s, when people could only drink alcohol secretly in speakeasies. These establishments often served finger foods throughout the night so that guests would not appear intoxicated after leaving. These foods were always small bite-sized items that allowed guests to eat while drinking. Afterwards they continued to be popular at cocktail parties because they were easy to handle and transport.

Cold meats, or cold cuts, also referred to as luncheon or deli meats, are mostly cured or cooked meats that are sliced and served cold. Often used in sandwiches, there are numerous varieties. This recipe uses Parma Ham, but one could easily use Black Forest Ham or Bresaola, or any other cold cut that suits your taste or pocket. Take note that even though they are not super healthy because of their higher levels of fat, nitrates and sodium, one really only eats a small amount together with the other ingredients. Glen Rock Hams in the USA says that “premium deli meats are low in calories and a great source of vitamins B and E, lean protein, iron, zinc, and magnesium” and that in fact, “they are said to build muscle strength and bones, boost the immune system as well as hinder the harmful oxidation of cells”. Since papaya is such a super healthy food, it may well sufficiently counteract concerns about the lack of cold meats’ healthful properties. Be sure to use enough filling – in other words, do not skimp on the vegetables that are wrapped up in the bundles.

Ingredients for around 10 rolls:

Mix together the pesto, horseradish, salt and pepper. Lay the meat slices open on a large cutting board, and smear a dollop of the mix over all the slices. Equally divide the beans, papaya and cheese between the slices and place a small bundle on each slice of meat. It looks nice if some of the vegetables, papaya and cheese sticks out of the side of the meat, so if necessary tuck some of the meat in, so that the meat is shorter in width than the filling. Roll up tightly and tie the bundles together with the chives. Serve them cool but not straight from the fridge, although on warm days you may want to ensure they do not hang around outside the fridge before being eaten.