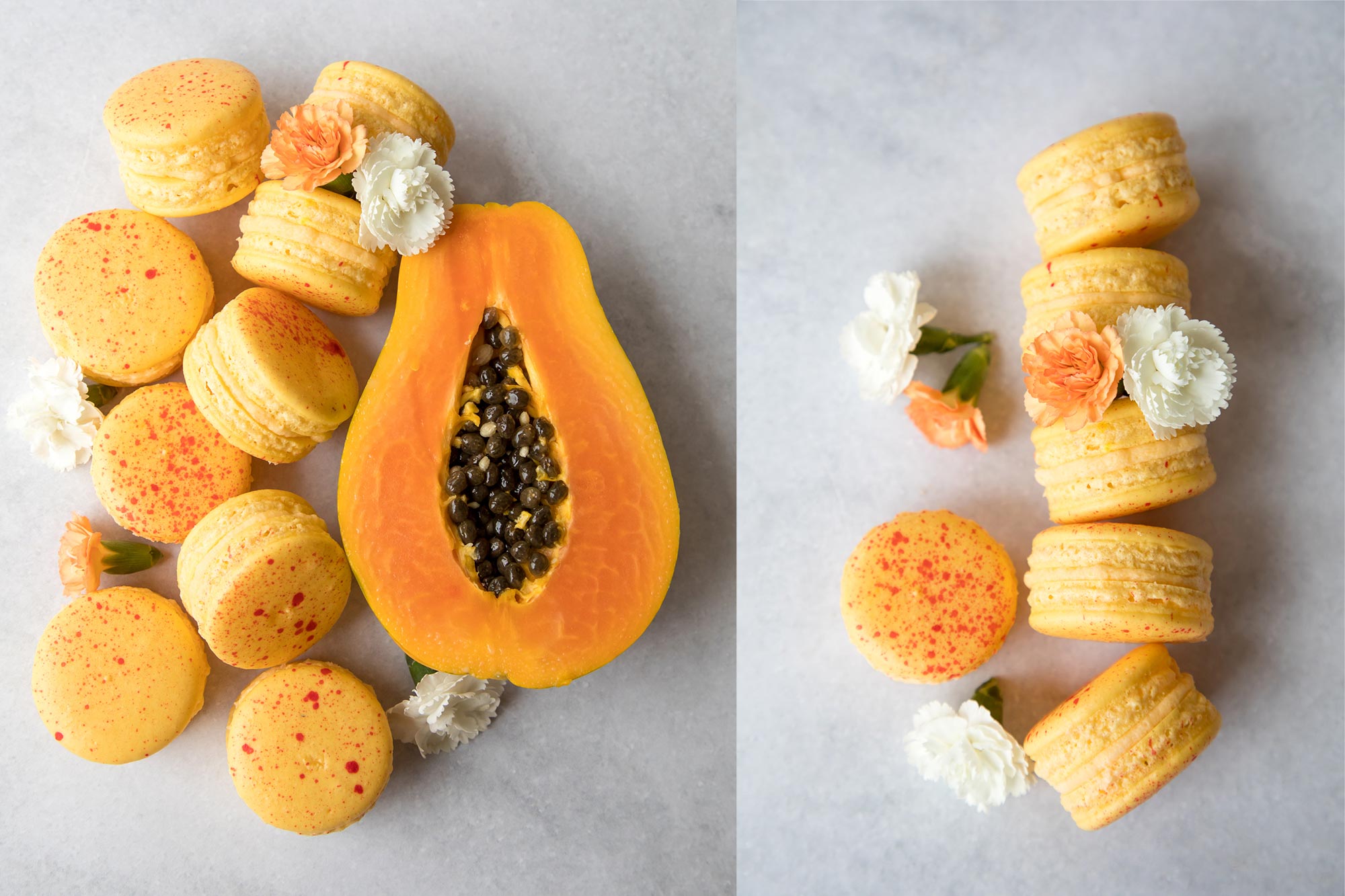 Macaroons, or more correctly Macarons, require considerable skill and dexterity to get right. But once one understands a few core principles, they are not so intimidating. Their origins are uncertain, with some sources claiming that they originated from an 8th or 9th century Italian monastery, while other references mention that macarons come from Commercy in France around the year 791. They more likely originate from Venice, as the word macaron derive from the Italian word ammaccare (to crush) or maccherone (to paste).

To achieve perfect macaron shells requires some practice, as most ovens have their own quirks that will affect the baking time, while the best place in the oven (higher up rather than lower) could also play a role. Other aspects that may affect macarons are the thickness of the baking sheet one uses to bake them on, as conductive heat through the metal plays a huge role in heating up the macarons from the bottom. In the same vein, if one pipes them onto baking parchment or a silicone mat could also influence their success, as silicone mats have a profound impact on conductive heat as the baking sheet. Humidity may also impact on one’s success when making macarons – if it is one’s first time, rather do not make them when it is very rainy or humid. Also, where one is situated above sea level could impact the exact amount of sugar required to make successful macarons. But by all means experiment making this recipe – if they fail, one always has nice almondy meringues to make a version of Eton Mess from.

For the papaya buttercream:

Line a large baking sheet (Swiss roll pan) with baking parchment or a silicone mat. Draw smallish circles on the parchment paper (or on normal paper that is placed as a guide under the silicone mat). In a food processor blitz die ground almonds and the icing sugar. The aim is to get the mixture as fine and powdery as possible, without oiling the almonds. Rather blitz, than run the machine at full speed, and scrape the bowl down often. Sieve the mixture more than once to ensure a very fine powder – discard any bits of almond that remain in the sieve, without changing the volumes too much. Set aside. In a large mixing bowl, beat the egg whites until fully volumised but not dry, using the mixer’s whisk attachment. It is important to attain full bulk of the egg whites, without letting them become dry. Add the castor sugar and beat to a stable meringue, but again, not too much, so the meringue should not be dry. The next step is referred to as the macoronage, where the almond sugar powder is folded gently into the meringue. Add the almond sugar powder on top of the meringue along with the desired drops of food colouring to achieve a nice papaya colour. Fold the mixture together until it is soft but still droopy. When to stop folding takes a little practice – if the mixture is not folded in enough, the piped macarons will stand up too firm and round, and if it is over folded they will spread too much when piped. Fill a piping bag with a plain nozzle and pipe onto the circles, just until they reach the edge of the circle. Once the baking sheet is filled, bang the sheet fairly hard on the surface to ‘spread’ the macarons slightly. Pedantic bakers may wish to pop any small bubble with a pin, to achieve an ultra-smooth shell. Set them aside for at least two hours or until the top is dry and a little skin has formed. Pre-warm the oven to 135 °C. Bake for 14 minutes, until they have puffed and a nice foot (the puffy frilly sought-after edge around the base of the macaron) has formed. Test one of the macarons in the center of the baking sheet. It should come off fairly easily, with a shiny underside. Do not under-bake them or the base will stay behind on the paper/silicone mat, but also do not over bake them or they will be too dry. Rather do not bake two sheets at the same time, instead bake one after the other. One can do some spattered decoration before or after baking.
Make the buttercream by warming all the ingredients (except the butter and papaya paste) in the large whisking bowl of a freestanding mixer placed in a pot of water, until it reaches 68 °C, stirring all the time. Remove and with the whisk attachment beat the mixture until it is pale and light yellow. By this time the mixture should have sufficiently cooled down. Drop small blocks of butter into the mixer while it is running and continue beating until all the butter is incorporated and one has a smooth, light icing. Beat in the papaya paste. Fill the macarons with a small spoonful of mixture, and sandwich two rounds together. They are best served a few hours after being made, to give them time to soften slightly.

Note: the overall moisture content of papaya purée may be too high to incorporate directly into buttercream mixture. To make the heavy papaya purée, peel and de-seed a thoroughly ripe, aromatic papaya. Blend the papaya flesh in a food processor, liquidiser or with a stick-blender in a tall jar, to get a smooth purée (strain through a fine sieve if you are uncertain that your purée is lump-free). Line a sieve with a clean, rinsed layer of high-quality muslin cloth. Pour the purée onto the muslin, cover with plastic wrap and leave overnight in the fridge for the liquid to drain out and the papaya purée to become thick and paste-like.