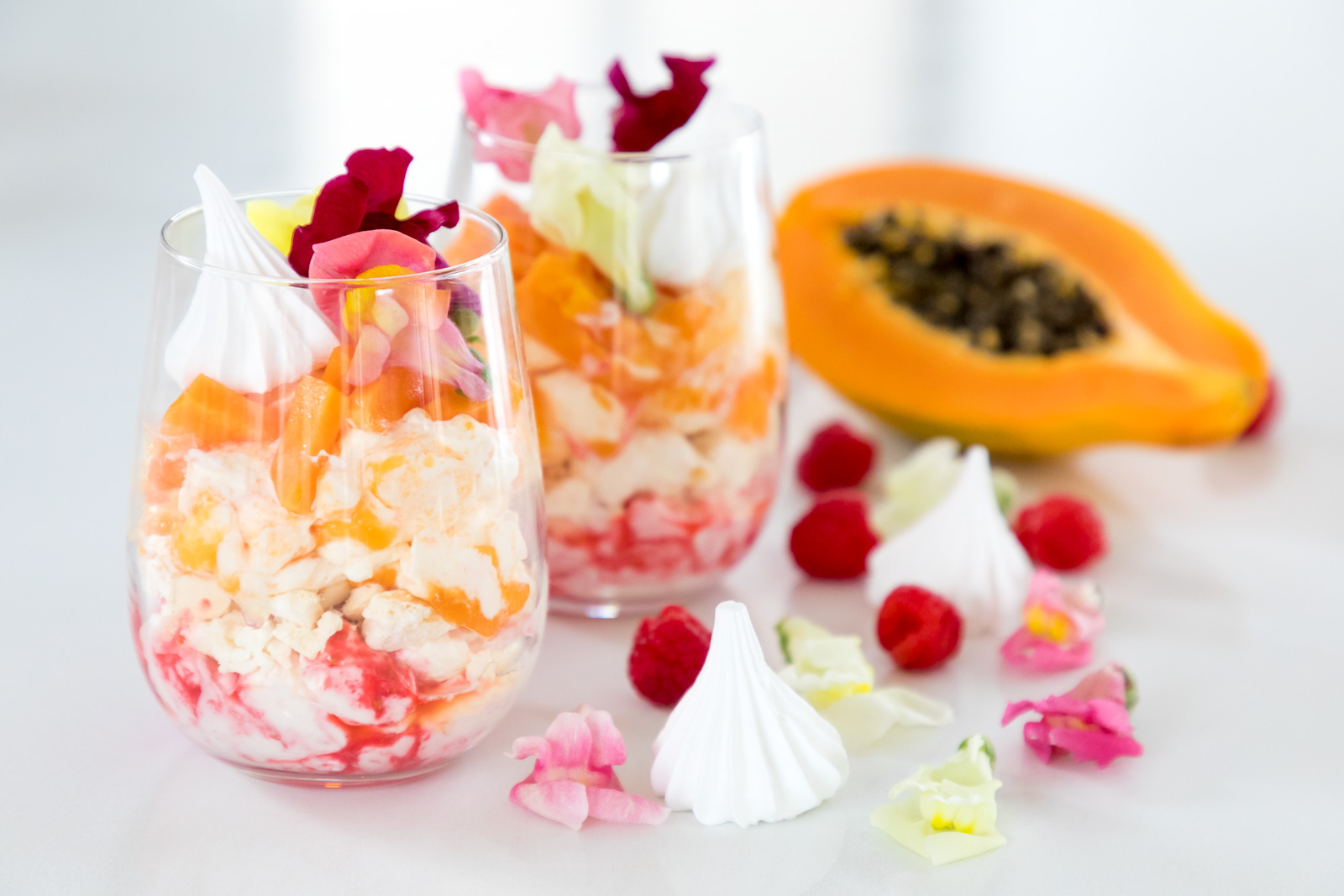 This recipe could be considered a silver bullet in anyone’s cooking arsenal. It is super easy and simple to make, and if you feel disinclined to make the meringues yourself, you could buy them ready-made. The only consideration with store bought meringues is that they are purposely dried out much more than one wants for this recipe, to extend their shelf-life. Home made meringues are gooey, soft and sticky inside, and meld with the cream and fruit to create one of the best puddings ever. This is a golden opportunity to learn how to make meringues, as they need not be perfect in any way; they are broken up, and even if a few tiny prettily piped meringues as garnish look great, one need not have them. So, even if your meringues are a total flop, they would still be usable.

The thing that makes Eton Mess great is the perfect harmony between sweet meringue (with a little crunch), acidity from the fruit sauce, and the lusciousness of the cream. Papaya purée is slightly sweet as a sauce on its own, so a little acidity introduced by the raspberries counterbalances it perfectly. Although Eton Mess is traditionally made with strawberries, the combination of papaya and raspberries creates a complex tropical and European forest flavour mix that is totally delicious.

Like so many times in the culinary world, the name for this dessert is indeed also somewhat of a convoluted mess. Caroline Waldegrave and Sandra Robinson, who wrote a recipe book for Eton College, cites two different stories – one about a famous cricket match between Eton and Harrow in the late 19th century, where the pudding was dropped and had to be reconstituted, and another story from the ’30s that involves a Labrador! The two authors interviewed many famous people who attended Eton, including Tory minister William Waldegrave, who declared that the dessert actually did not have any connotation with Eton, and should rather be called strawberry mess. Whatever its name, this remains a delicious dessert that one can whip up in no time and would satisfy most people’s need for a little sweet at the end of a meal.

Ingredients for 4 to 6 individual portions of Eton Mess:

For the two purées:

Preheat the oven to 110 °C. Place the egg whites in the bowl of a freestanding mixer, ensuring that it is completely clean, dry and grease free.
Beat the egg whites with the balloon attachment until frothy. Turn the mixer to high speed and beat the egg whites until they are fully volumised.
Add the sugar slowly, little by little, ensuring that the mixture remains as stiff as possible between additions of sugar.
When all the sugar has been added, add the vanilla and beat just a second to distribute. Either pipe or dollop the meringue in quarter cup volumes onto a baking sheet lined with baking paper or a silicone mat.
Place in the oven and bake for an hour.
One can also pipe a few small button-sized meringues to be used as garnish.
Once the meringues are done, remove from the oven and leave to cool.

Make the two purées by first placing the papaya, lemon juice and sugar into a liquidizer and making a very smooth purée.
Repeat with the raspberries, lemon juice and sugar. Set aside.
Beat the cream stiffly and divide in half.
Swirl the two sauces into each half.
Do not over mix, you want the sauces to be visible in the whipped cream to create a marbled effect.

Decide if you are assembling the Eton Mess in one large glass bowl, or individual glasses.
Blob a bit of fruit cream at the bottom of the container (it doesn’t matter which of the two cream mixtures you start with), and then break some meringues over.
Alternate the remainder of the cream and meringues on top of each other, until all the cream and meringues have been used up.
Finish off with some tiny meringues and fresh fruit, and garnish with edible flowers.
Make the Eton Mess a little ahead of time to allow the cream to soften the meringue slightly, but don’t make it too long in advance (such as the day before) because the cream will cause the meringue to melt away completely.