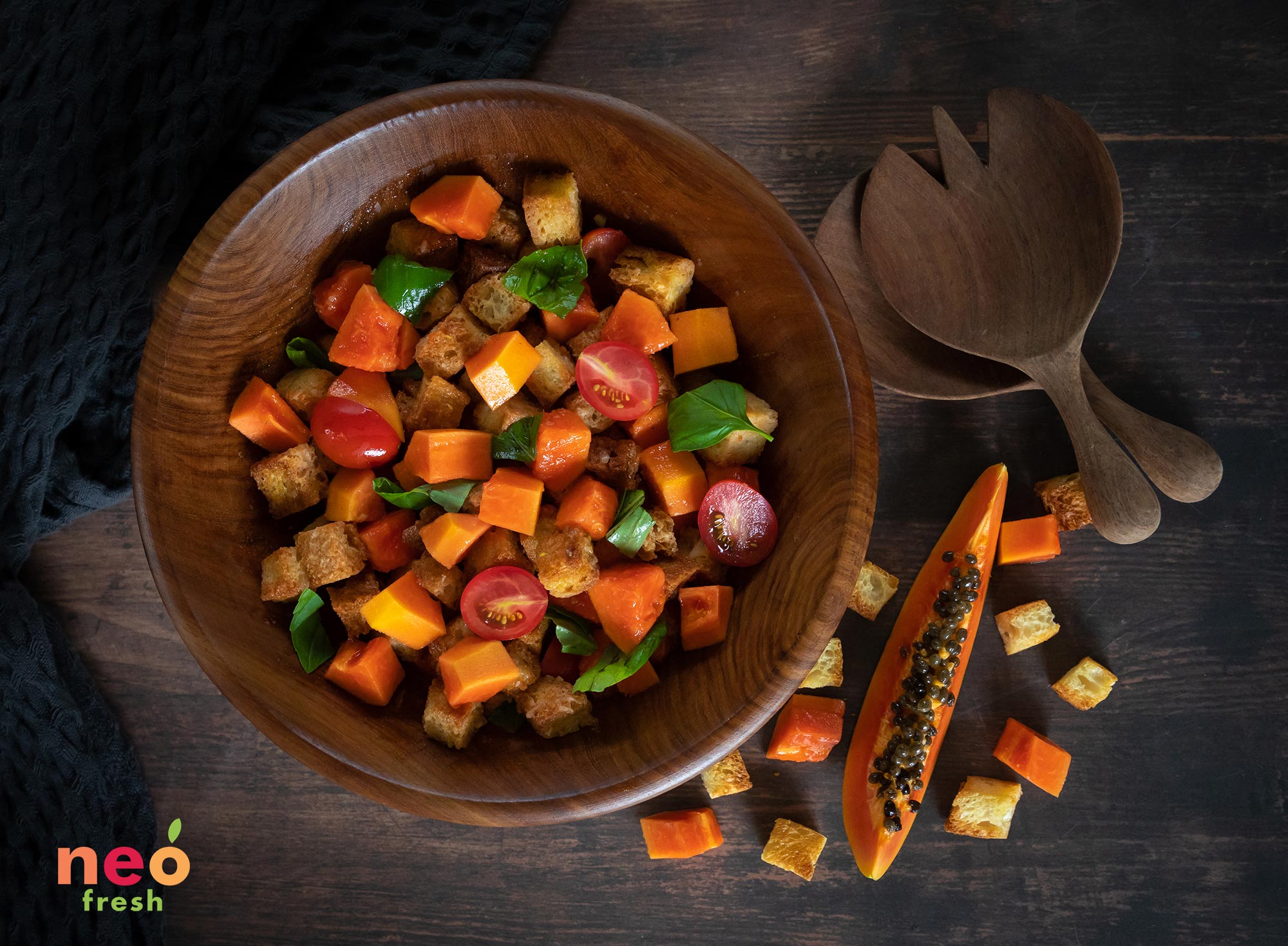 Panzanella – tomato and bread salad – may not be the prettiest salad on the block, but darn, is it good. The inclusion of papaya provides just a little hint of sweetness that turns it into a super star. Serve it at a braai, with cold meats or a whole roasted chicken and you actually need nothing more. It is healthy and satisfying, and not even eating too much of it need be a concern, because it is light and lovely.
Various sources inform us that the traditional Panzanella was initially made with onions and not tomatoes – that is until the 20th century (probably when tomatoes became an everyday commodity). Despite its origins, tomato panzanella remains an Italian favourite and is most often served in summer. Initially it was made with bread that was soaked in water and then squeezed dry (www.rareitalian.com). Later additions included cucumber, purslane for a bit of acidity, and basil. The name ‘panzanella’ is believed to be a portmanteau of ‘pane’, Italian for bread, and ‘zanella’, a deep plate in which it is served (www.wikipedia.com).

According to www.seriouseats.com Florentine painter and poet Bronzino said ‘Un’insalata di Cipolla trita con la porcellanetta e cetriuoli vince ogn’altro piacer di questa vita’. This translates into ‘A salad made with chopped onions, purslane, and cucumbers surpasses all other pleasures in this life’, of course referring to Panzanella. We can safely assume that Bronzino, if he tasted this version with papaya, would concur.

Ingredients for one large salad, enough for 4 to 6 people

First prepare the bread – toss the cubes in the olive oil and spread out on a baking sheet fitted with a silicone mat. Bake in a preheated (180 °C) for 15 minutes. Remove and set aside to cool.
Toss the halved tomatoes with the salt in a colander over another bowl to collect the draining juices. After about half an hour, mix the drained tomato juices with the finely minced onion, garlic, mustard, vinegar, pepper and 60 ml of olive oil. Taste the dressing and correct the seasoning if necessary, remembering that the tomatoes will already be somewhat salty.
Toss the bread cubes in the dressing and then gently toss in the papaya, tomatoes and basil.