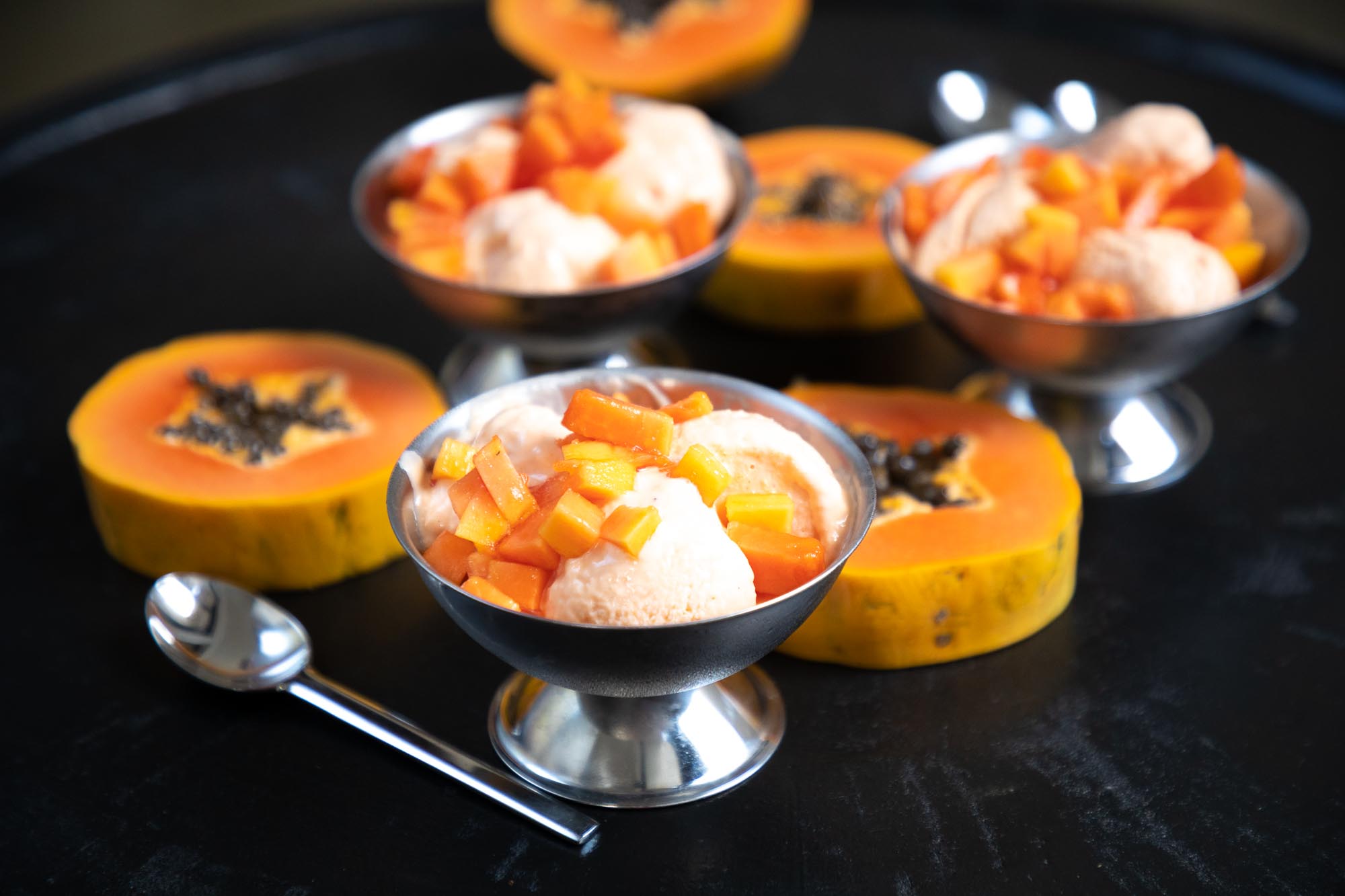 Kulfi is the Indian version of ice cream – milky, exotically spiced, yet comforting – which has apparently been around since the 16th century. Technically speaking it is a milk ice rather than an ice cream and is therefore traditionally made in moulds and served as a lolly, exactly like those milk ices we grew up with. If ever you should visit New Delhi, India, be on the lookout for those special moulds, which come in the most delightful shapes mostly made from inexpensive tin. The street vendors selling kulfi on the streets are referred to as kulfiwallahs. Similar ices are also popular in places such as Bangladesh, Myanmar, Nepal, Sri Lanka and the Middle East, with their warm climates.

Traditional kulfi is a delicious combination of creamy milk, subtly flavoured with spices such as cardamom or nuts, such as pistachios or almonds. Other flavours that have become established in the kulfi repertoire include rose, mango and saffron. The base for kulfi is made in the style of Italian gelato, but differently from gelato, is not churned which creates the silky mouthfeel that gelato is prized for. Kulfi is a no-churn ice cream, resulting in a texture that is somewhat icier, with evident crystals – but this is what makes it an absolute winner on a hot day.

This traditional recipe is fairly laborious. The milky richness comes from reducing the milk on the stove for an extended period. If simmering milk for hours to reduce it does not appeal to you, many recipes for instant or easy kulfi can be found using tinned evaporated milk, with only a slight loss of flavour. For this recipe the kulfi was made and frozen in a two-liter ice cream container – but as previously mentioned, you can also freeze them individually in lolly moulds. If you choose to freeze the kulfi in one batch, be sure to remove the container from the deep-freeze to the fridge an hour before serving to soften slightly, otherwise scooping it will become a Herculean task. This recipe does not contain too much sugar, which contributes to the hardness of the ice-cream and the iciness of the texture – by all means feel free to increase the quantity of condensed milk if you would like the final product somewhat sweeter. The papaya in this recipe ensures a lovely freshness to the kulfi, which may be slightly heavy and overly rich for some palates.

If you have a Teflon coated casserole, this would be ideal. Be forewarned that it is almost impossible to reduce the milk and not have a little burnt layer at the end of the cooking process. Do not be tempted to scrape the pot and know that it takes some serious cleaning afterwards. Add the milk to a large pot and bring to a rapid boil. Thereafter, turn the heat down and simmer for nothing less than two and a half hours, by which time the two liters of milk would have reduced to 500 ml. Cool the milk. Place the cooled, reduced milk and all the remaining ingredients in a large liquidizer and blend to a smooth purée. Strain through a fine sieve and freeze until hard. See note above about removing the kulfi from the fridge in advance to thaw somewhat. Scoop and serve with more papaya cubes.