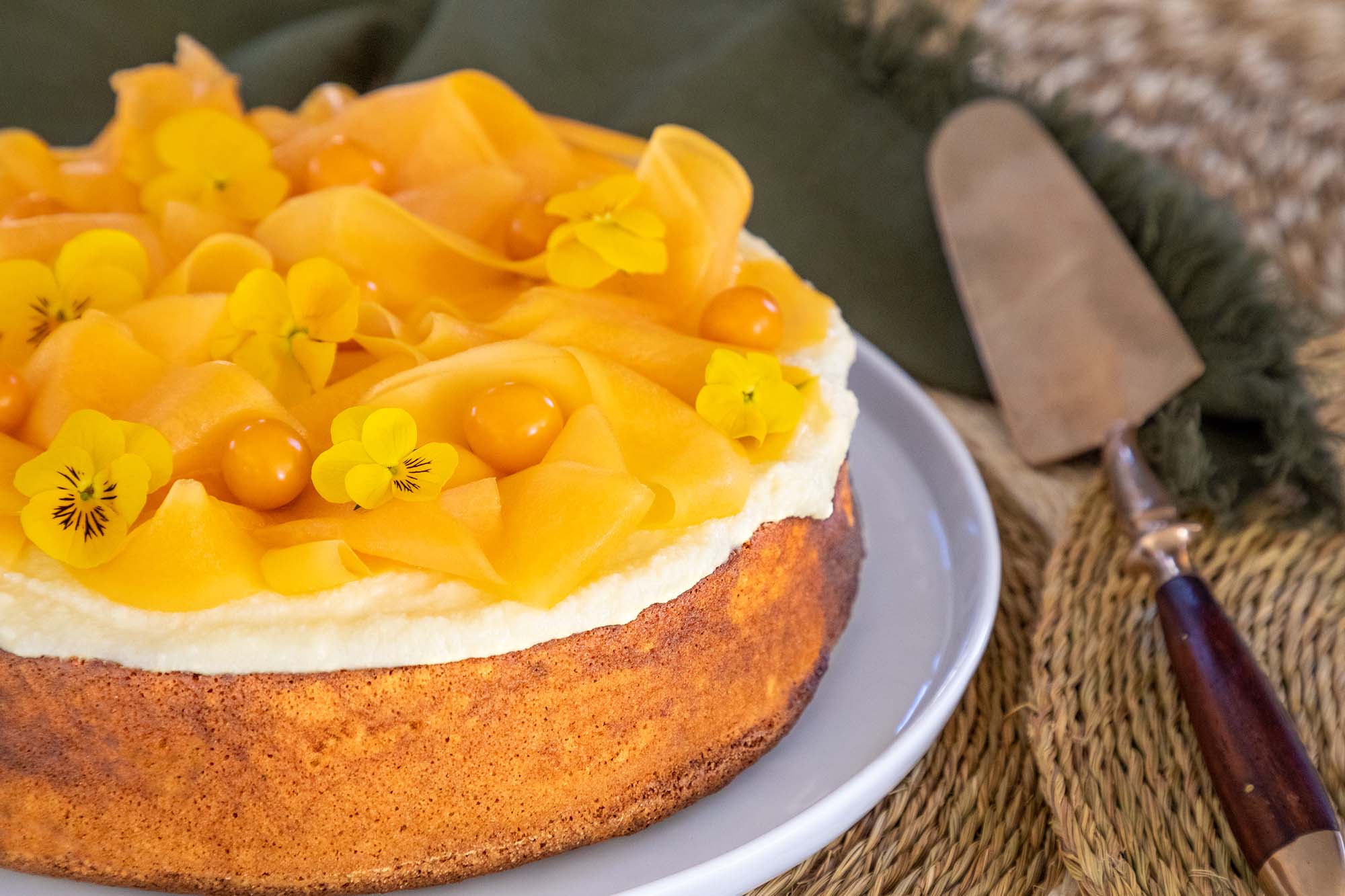 This is a delightfully simple cake to whip up in a jiffy. It is super easy to make, delicious and a beautiful canvas to celebrate papaya. There are a few meticulous steps to follow in making the cake, such as understanding that the cake has no additional chemical (or other) leavening agent, apart from the very well beaten eggs. So, ensure that they are aerated very well. The cake can be baked in two tins should you wish. However, as there is no fat in the cake batter it dries out fairly easily, so take care if making it in two tins not to overbake them. Often one wants a simple cake that does not require a lot of work, when a cake in one tin is just what you need. You could then split the single cake layer in half, but Europeans often bake just one layer as a simple tea cake with icing and/or fruit decoration.

Apart from the fact that Griestorte has German or Bavarian origins, there is little information about its history on the internet or any food encyclopedic books consulted. The German word Gries translates to ‘gritty’, which makes sense because of the semolina. A few commonalities exist between recipes – most recipes for Griestorte uses a combination of semolina, ground almonds (also sometimes referred to as almond flour), lemon zest and fresh lemon juice. The grittiness that comes from the semolina is also the cake’s redeeming health aspect (apart from making it quite delicious, since it is somewhat heavy on the sugar). Semolina is made from the endosperm (the very nutritious part that is often removed in the normal flour milling process) of durum wheat. Durum wheat grains are golden in colour and therefore produces a flour that is pale-yellow. Semolina flour is mainly used to make couscous, pasta and sweet puddings, and is fairly readily available in South Africa.

The cake is finished with a layer of cream cheese icing, but it could also be finished off with a simple layer of whipped cream. Some skill is required to make the papaya ribbons – the papaya should be ripe, but not overly ripe. One could give a potato peeler a try when making the ribbons, but vegetable peelers generally produce a ribbon that is too thin, so the best is to make the ribbons using a mandoline. Be brutish – grab onto a piece of papaya and simply slide it in the length over the mandoline blade, but do be careful of your fingers!

Ingredients for one large cake that can easily be cut into 12 – 16 portions:

Preheat the oven to 190 °C, and place an oven rack in the middle of the oven. Prepare either a 25 cm cake tin (rather 20 cm when making 2 cakes) by greasing or spraying them thoroughly. Cut a piece of parchment paper to precisely fit the bottom and grease again. Dust the bottom and sides of the tin(s) first with castor sugar, and then over that, a dusting of semolina – lightly tap out any excess. This will produce a nice crisp outside crust.

Place the egg yolks and sugar in the bowl of a freestanding mixer with the whisk attachment. Beat on high heat until the mixture is very thick and almost white. Gently fold in the almond flour and semolina flour, and thereafter the two citrus zests and lemon juice. The mixture should now sit for a little while – 5 to 8 minutes, for the semolina to soften slightly. In the meantime, whisk the egg whites to a firm but not dry peak in another clean bowl with the whisk attachment. Gently fold the egg whites into the mixture. Pour into the tin(s) and give them a fairly firm bang on the work surface to dispel any large air pockets. Place the cake in the oven – the large cake should bake for around 40 minutes, while two cakes should be done in around 25 minutes. Touch the surface of the cake to establish that it is cooked – the cake should feel dry to the touch and make no indentations. Bring them out of the oven and let them cool for around 8 minutes in the tin. Turn out on your cake plate or cake stand and remove the paper. Let them cool properly. In the meantime, make the icing by beating all the ingredients together until aerated and fluffy. Spread on the cake. Decorate with flowing ribbons of papaya, papaya balls, gooseberries and edible flowers. Because there is no fat in the cake it will not last for a very long time, but it does become better over a two- or three-day period.