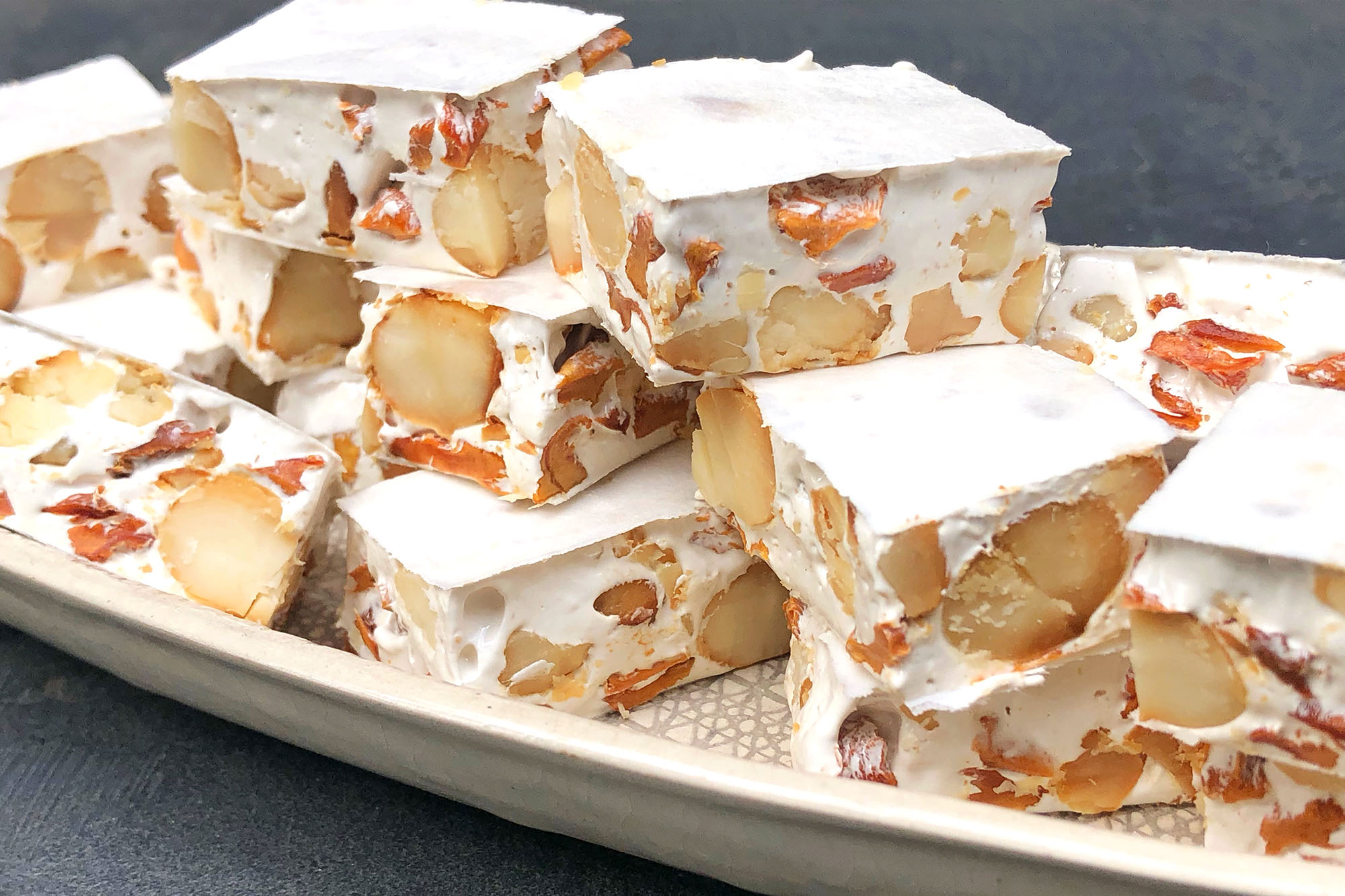 Nougat is unfortunately not the easiest of confectioneries or candies to make. It is however super delicious. In this recipe, the nougat showcases two of the Lowveld’s most iconic ingredients, papaya and macadamia nuts. You could add an array of different nuts and dried fruits to the recipe but here we want to highlight and celebrate the slight chewiness and delightful tropical fruitiness of dried papaya. The macadamias provide crunch, richness and complimentary nuttiness. Search the internet for fascinating facts about the origins and history of nougat, as well as the lovely names for different versions across the world, such as turrón, torrone, mandorlato, cupeta, cubbaita, mandolato, mandola, qubbajt, alviță and luka.

The problem with nougat is that the egg white is cooked and stabilized through the use of a saturated, high temperature sugar solution, and if this base mixture is not stable the candy will become overly soft, sticky and unmanageable over time. One has to be vigilant when working with sugar at such high temperatures – apart from the fact that it can cause really bad burns, it can also change radically from one instance to the next. So, be very well organized when you make this confectionary, with all the required tools and ingredients pre-measured and at the ready.

The macadamias for this recipe are really best when they are very well toasted. They can burn quite easily, but you should be daring and actually toast them somewhat darker than you would have thought possible – they seem to just become more delicious the darker they are. You can toast or dry fry them in a pan which is probably a more cost-effective way, but they acquire a more uniform toastiness when done in the oven. Simply spread them out on a baking sheet and toast them at 180 °C in the oven, stirring them often, until they are deep caramel coloured. Remove them immediately from the baking sheet so that the heat from the baking sheet will not over-toast them. They could be kept whole for this recipe, but the mixture becomes difficult to manage if they are all left whole. Bash a few of them a little smaller – no need to chop them elegantly, it is better if they are a little irregular.

For this nougat recipe, the other core ingredient is the papaya. Since fresh papaya would not work and fully dried papaya would be too hard, you need papaya cubes that are dried on the outside, but still chewy. To achieve that, cube the papaya into medium dice. Lay them out in a single layer on a silicone mat on a baking sheet. Place them in an oven at 100 °C for at least two hours. Check them regularly, ensuring that they do not dry out too fast, but also tossing them over so that the bottom also dries when they are facing up. They should be completely dry to the touch but retain a little softness when squeezed.

This recipe is for 12 to 15 fairly large pieces of nougat – you could cut them smaller as they are relatively sweet. Working with one egg white may be difficult, so it may be better to double the recipe to have a more manageable mixture.

Ingredients for around 12 – 15 domino-sized rectangles

Place the sugar, water, glucose and honey in a small, heavy-bottomed pot. Bring gently to the boil. When the mixture is boiling, do not stir or move the pot too much, as the mixture that may splash up the side of the pot could crystalize and cause the whole mixture to seize. Have a digital food thermometer ready and take a reading. When the sugar mixture reaches around 130 °C, beat the egg white until foamy in the bowl of a free-standing mixer with the balloon whisk attachment. Do not over-beat the egg. Now increase the temperature of the sugar and cook until 154 °C, and immediately pour the mixture in a thin but steady stream over the whipped egg whites, while the whisk is running at high speed. Avoid getting any of the mixture on the balloon whisk, as it will immediately cool and harden – therefore pour in-between the beating whisk and the bowl. The mixture will expand tremendously – which it should. Now beat on high speed until the mixture is really think and glossy – this will take a good 10 to 15 minutes. Immediately turn the nuts, papaya and vanilla into the mixture and with deft actions, mix together. The nuts and papaya will cool the mixture which will make it stiff, so you should work fast. As soon as all the nuts and fruit have been incorporated, turn the mixture out onto a lightly oiled work surface such as a granite or marble slab. Use a rolling pin and flatten the mixture to about 2 to 3 cm thickness. If you leave it thicker, you will have square blocks when you cut it. Try to keep the piece of confection as rectangular or square as possible, so that you won’t end up having any round corners that may not cut into perfect shapes. Place a sheet of rice paper over the top and bottom, and leave to harden and cool completely, for a couple of hours. Use a piece of kitchen paper and lightly oil a large, very sharp kitchen knife and cut the nougat into desired shapes, either staves, squares or rectangles. Store covered.